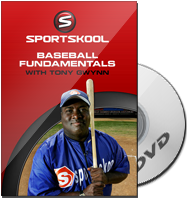 During his 20-year career in major league baseball, hall-of-famer Tony Gwynn won eight batting titles, seven Silver Slugger awards and was a fifteen time All-Star. His lifetime batting average of .338 ranks him as one of the greatest hitters in history, and his five Gold Gloves prove that he was as productive on the field as he was at the plate. As head coach at San Diego State, Gwynn led the Aztecs to a regular season title and was named 2004 Mountain West Conference Coach of the Year.

Now, Sportskool offers all of Tony Gwynn's collected wisdom in a single DVD. Join Tony and his award-winning coaching staff as they break the game down to its fundamentals, so you can build your game from the ground up.

Whether you're just getting started or ready to take your game to the next level, look no further than Baseball Fundamentals with Tony Gwynn.

Free Preview from the DVD: