Take to the ice like a pro with Sportskool's world-class player/instructors. Players at every level know the value of drills for better accuracy, speed and endurance. Dominate the rink from face-off to final seconds with NHL's finest - Kris Draper, Adam Graves, Mike Richter, Tom Martin, Curtis Joseph, Peter Forsberg and others.

Sportskool features Hockey on the following channels and DVD: 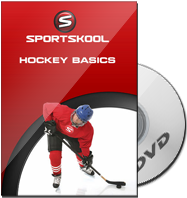 Few goals in the history of hockey have been more celebrated.

Peter Forsberg put his first stamp - literally - on hockey in the 1994 Winter Olympics in Lillehammer, Norway, with a backhander past Canadian goalie Corey Hirsch. The 20-year-old's shootout goal - later immortalized on a Swedish postage stamp - gave the hockey-crazed country a gold medal and the world a taste of what it would soon see in the NHL: the best player on the planet.

Forsberg came over to the North America the next season, and the center has been the NHL's most dynamic and constant scoring force since. He won the Calder Trophy as rookie of the year in 1994-95 with the Quebec Nordiques. The next season he had 86 assists and 106 points as the Colorado Avalanche won the Stanley Cup.

Forsberg's managed to keep playing like a superstar while fighting two unlikely enemies: the league and his own body. As NHL scoring started eroding in the late 1990s, he still piled up points through the clutching and grabbing. He had 97 points in 1998-99, and led the league with 106 in 2002-03.

But he has rarely been healthy since his first two seasons. In one eight-year stretch he missed 237 games, the equivalent of almost three seasons. He missed the entire 2001-02 regular season after he had his spleen removed the previous spring. In typical Forsberg fashion, he came back for the playoffs led the NHL with 18 assists and 27 points in 20 games. In 2002-03, led the league with 106 points and won was named NHL MVP.

The first-round draft pick of the Toronto Maple Leafs in 1967, Tom Martin has spent more than 40 years playing and coaching hockey at some of its highest levels.

Martin won a Memorial Cup (Canadian Junior Hockey's championship) with the Toronto Marlboroughs in 1966-67. He captained the Marlies the next season and had a three-game stint with the Maple Leafs, which started his 12-year professional career.

The right wing was the Central Hockey League's Rookie of the Year in 1969-70 when he scored 21 goals and 56 points for the Tulsa Oilers. He played 212 games in the World Hockey Association with the Ottawa Nationals and Toronto Toros. Martin ended his playing career with four seasons in Sweden, winning a league scoring title with 42 points in only 20 games for Lulea in 1975-76.

Martin spent his time in Sweden as a player/coach, first as an assistant and then the final two years as the head coach of the IK Viking.

He came back to North American and coached various levels of junior hockey, including a two-year stint with the Marlies (1983-85) where he coached well-known NHLers like Sean Burke, Steve Thomas and Peter Zezel.

The indelible image of goalie Mike Richter, split like a wishbone about to break, stopping Vancouver's Pavel Bure with his right leg on a penalty shot in Game 4 of the 1994 Stanley Cup Finals stands as the signature moment in an illustrious 15-year NHL career.

The save, one of the most famous in hockey history, propelled the New York Rangers to another win en route to their first Stanley Cup in 54 years. Richter's 16 playoff wins that season and iconic stop helped elevate him to superstar status. For the next decade, Richter, clad in his trademark Statue of Liberty mask, was one of the premier goalies in the NHL.

Arguably the greatest American-born goalie ever, the Rangers drafted Richter in the second round, 28th overall in 1985. He played two seasons at the University of Wisconsin before leaving to play for the United States in the 1988 Olympics. After parts of three seasons in the minors, Richter stuck with the Rangers in 1990-91 and split time with John Vanbiesbrouck for three seasons before he took over the bulk of the duties in 1993-94.